Are Your In-Market Audiences Really Active Shoppers or Are You Getting Taken For A Ride? 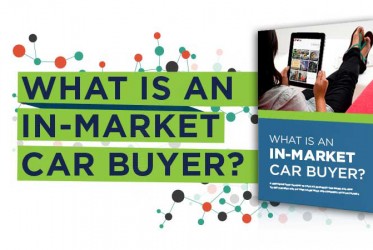 There’s a relative new term that’s been introduced with the advent of the data marketing revolution. The term is “in-market.” And it’s all three of the above.

For automotive marketers, “in-market” should mean that their advertising is reaching people who are ACTIVELY in the process of shopping for a vehicle. The idea is that if the objective is to sell automobiles, it’s more important to talk to a person who wants to buy an automobile than to someone who just purchased or doesn’t intend to for quite some time.

Media reps and advertising vendors may emphasize that their strategies are aimed directly at consumers identified as “in-market.” That’s well and good, so long as they can tell you exactly what they mean. “In-market” can have a variety of definitions. For many vendors, “in-market” doesn’t always mean “actively shopping”.

So how do you tell if your media is reaching actively shopping, in-market car buyers or if a vendor is pulling one over on you?

Or, for other vendors, “in-market” may mean that based on predictive data like vehicle equity and lease expirations someone should be coming into market. However, the phrases “should be” and “definitely is” are two entirely different things.

Then, there’s vendors where “in-market” may mean they utilize anonymous 3rd party offline or online data to target audience members that display characteristics that they may be thinking about buying a car. It has the potential to be highly accurate but it’s often back-filled with useless audience information to bolster numbers for overall reach.

The problem with all of them is their identification strategies aren’t necessarily a true indicator of someone actively shopping for a new vehicle. At best, they are all educated ways to blindly throw darts at a small target on a very large wall. Each is just slightly more accurate than the precursors.

To really get to the heart of reaching active, in-market shoppers – automotive marketers have to get beyond the sales pitch and find out exactly what “in-market” means, and how each of their vendors proves it. To truly locate and target active in-market shoppers, it’s all about extremely accurate data that’s based on real-time activity. And, most marketing vendors don’t have access to it.

Below are four basic questions anyone can ask to get to the truth. A media vendor’s ability to answer them specifically, without a lot of rambling, will tell you whether “in-market” actually means real shoppers that turn into eventual customers or if they’re just utilizing a buzzword to keep up with trends.

Question 1: Where do you get your audience data? The idea is that if they can’t tell you their sources how are you supposed to know if they’re speaking the truth.

Question 2: How current is your data? The speed at which active car shoppers move can vary greatly between awareness, familiarity, consideration, and purchase. Data that’s more than a few days old can mean that it’s too old to utilize and produce effective results.

Question 3: How accountable do you hold your data providers? If a vendor doesn’t own the data they use then they have to be purchasing it from someone else. If they are, how do they hold their vendors accountable for good data that produces results.

Question 4: How do you measure performance for the data utilized? If the right data is being used then it should and can be measured. Any marketing vendor who says they use data to reach car shoppers should be able to tell you exactly what their data and strategies are producing towards the goals you’ve set.

Data-driven marketing has, in some ways, taken the already vague world of advertising and made it even less distinct. There are dozens of ways of reaching prospects, and they are at least that many levels of accuracy. The key to making sure that the marketing dollars spent provide the greatest return is in making sure audiences reached are the right ones and then choosing the most productive media. Then, it must be insisted that performance is based on real-world measurement—sales rather than audience. And now, because of the active in-market shopper data that’s available to everyone, it’s something every dealership should and can do. 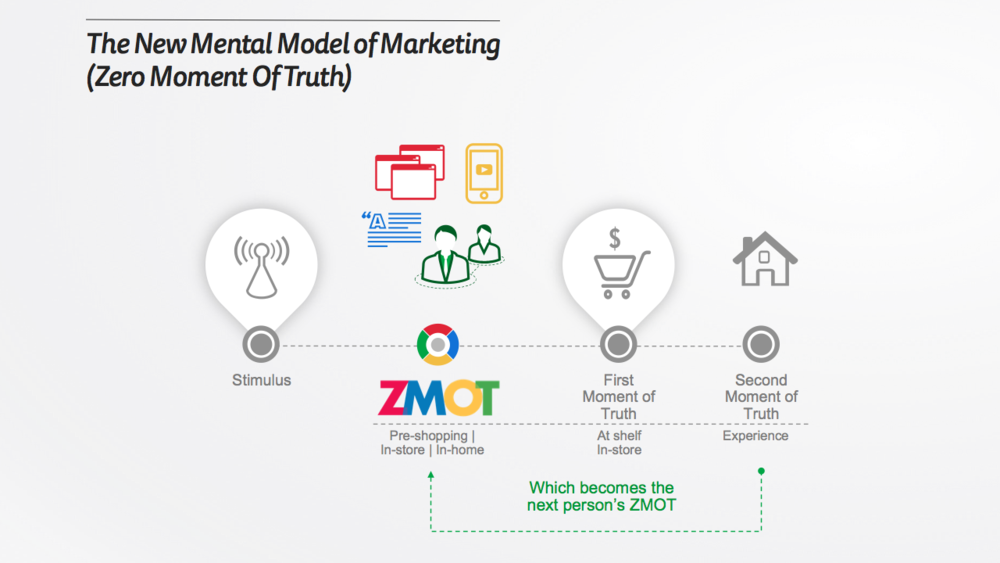 What is ZMOT?  Google it!  Never mind I’ll just tell you.

ZMOT – That’s when the customer (buyers) decides to:

It’s a buyer telling you he or she is ready to meet you and have you fill their needs and want and they are ready buy a vehicle!  It’s the moment of truth!!!

Today’s dealers mistakenly still refer to these customers as “Leads” or “UPS”, they not Leads or UPS they are “Buyers”.

Some reading may say I’m crazy.

“If you change the way you look at things; things will begin to change.”

Do you know what happens before they come in, call or contact you?

The spend 18.5 hours online, BEFORE ZMOT.

18.5 hours before you or your staff ever see them, here their voices or get an email.

You see years ago before the internet and when newspaper ruled they weren’t “buyers” they were “ups”, “phone ups” and “leads”.   We just haven’t changed our mindset.  Suggest to you maybe we should.

What you now know is today buyers go to only 1.4 dealership.        Meaning if you don’t sell that buyer when they contact you the next guy 100% will.  It’s just math.

We can get them to contact you as we know what they are doing for the 18.5 hours before you do.

Ok…….we know everything and thus we can have them to your dealership at ZMOT!

Wouldn’t it be nice if you could stop paying for points, spots, dots, reach and frequency altogether? We are not here yet but getting closer every day!

Wouldn’t it be nice if your marketing dollars where directed to just SALES and not EFFORT? We have been living in this space virtually alone since 2001!

Wouldn’t it be nice if you could convert your AD SPEND an AD INVESTMENT and know your dollars are being used just on SOLD and DELIVERED vehicles? We’ve been here since 2001 also!

Wouldn’t it be nice to have your marketing company get paid the same way your sales staff does as a variable cost? Yes, that’s us as well!

• Of those 6500 sold the 37 dealers have ONLY PAID for the cars SOLD and DELIVERED. They didn’t pay for reach frequency spots dots or points.

• We are creating a competitive advantage for those 37 dealers and they have EXCLUDED 11 other dealership, who cannot buy this program and massive advantage from us.

These 37 dealers have already made the switch from Blockbuster to Net Flix.

THE DISCIPLINE OF GETTING THINGS DONE:

THE DISCIPLINE OF GETTING THINGS DONE:

The issue of deficiencies and production is NOT auto dealer specific it is BUSINESS specific. The answer FOR MORE itself comes down to checking testing and then rechecking execution process of the personnel. A leaders goals or objective should be to get their people to WORK daily to attain the goals or objective of the business.

1. Does the business owner have clear goal(s)?
2. Do the employees/departments know clearly what that is?
3. Are they empowered to solve the problem?
4. What are the specifics steps needed to resolve that issue(s)
Did the employee write the plan to solve the “issue”. Does the employee own the problem? Does the boss THEN approve the plan, and make recommendations?
5. Does the owner review and approve the plan of attack.
6. What specifically are the rewards for the WIN and what specifically are the consequences for failure.

END_OF_DOCUMENT_TOKEN_TO_BE_REPLACED

The most important process COACHING

*5 Point Strategy to grow your own coaches

Coaching = A training or development process

At virtually every dealership in America we routinely promote our top sales associates into management. We promoted them because they demonstrated the ability to sell cars at a high level.

Selling cars at a high level as an individual is a totally different skill set than coaching a team to perform at a high level. The two skills are actually quite opposite.

Typically two failures are about to take place: END_OF_DOCUMENT_TOKEN_TO_BE_REPLACED

What are you doing to showcase your dealership Unique Selling Proposition?

Many dealerships in the country have something they hang their hat on.  Something they feel separates them from the competition. These are known as unique selling propositions or USP’s.    END_OF_DOCUMENT_TOKEN_TO_BE_REPLACED

Menu’s – Presenting value and all the options, is in fact allowing them to buy.  In 2013 most everyone has a menu “in the deal”.  This doesn’t mean F&I is actually menu selling.  The truth is still most are “Step Selling” and using a menu to do that.  Self-Exam – Is your finance department allowing your clients “to buy” from the dealership?  The answer is likely 100% NO, if any viable product you have is less than 10%.  It doesn’t matter if you tell me or yourself the menu is in the deal.  If less than 10% is a highly probable indicator your manager(s) are likely step selling, using a menu and likely NOT menu practicing buying. Don’t believe me!  Well 10% of the people buy anything, right? END_OF_DOCUMENT_TOKEN_TO_BE_REPLACED

The End of Truecar? Maybe…

When Truecar first burst onto the scene, some thought it was a good idea. Only paying for delivered customers sounded much better than the ocean of junk leads being sold back then.

Unfortunately, it wasn’t long before ridiculous pricing practices caused lots of backlash. Then in 2011, for various reasons things got even uglier. I’m talking legal battles and a mass exodus of dealers. It got so bad in fact, the number of dealers using Truecar dropped from 5600 in 2011, to barely 3,600 by March 2012. After taking a $75,000,000 blood bath, CEO Scott Painter was forced to make some major changes.

END_OF_DOCUMENT_TOKEN_TO_BE_REPLACED 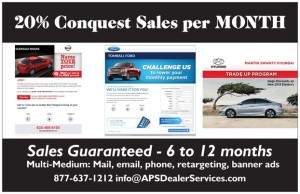 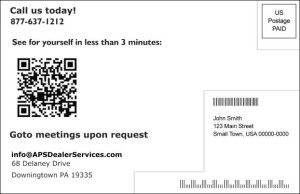 First half comes to a close!!!

As the first half of 2014 comes to a close, most people tell me they’re are amazed the year is half gone. It’s right about now when we all have an important call to make. Depending on what’s happened the past 6 months, here’s how the 2 most common scenarios play out.

1. Not where you wanted to be.

If you’re off target after the first 6 months, most people lower their original estimates for the year, fearing the risk of failure. Some will decide more time off would help to “clear the mind” or “regroup”…